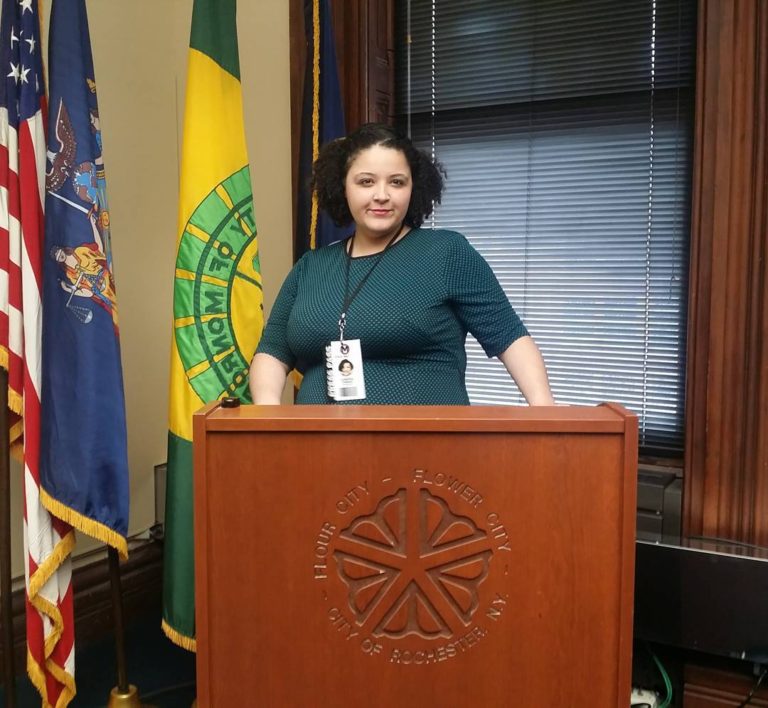 RocCity Coalition is a collection of people from various facets of the community whom are connecting with one another to achieve a stronger Rochester. Vanessa Cheeks is a local writer whose byline appears these days throughout Open Mic, an online-based black publication.

Vanessa is a Rochester area native whose passion for the city and its potential aligns with RocCity Coalition’s Vision 2025 plan. She is finishing a bachelor’s degree in advertising and communications with a minor in journalism. At the core of Vanessa’s work as a journalist is a desire to help people and make an impact.

Vanessa chatted with us about inclusive revitalization, the value of critical perspectives, and the importance of fair storytelling.

Where are you from originally?
I’m from Rochester and grew up across the street in Seabreeze, but as a kid we traveled a lot to see family in the south. Ultimately I moved to North Carolina as a kid and came back in grade school. As an adult I got an opportunity to live in the middle east which was great and then landed in Virginia, but Rochester has always been home. I think that is something native Rochesterians share. You can’t help but come back and feel like you never left.

What got you started writing?
I have always had a knack for writing, but in school it was book reports and essays. I love it, so journalism was an easy step. It was hard getting started, though. I made a lot of mistakes. My first opportunity came from MCC. I wrote for the Tribute out of the Brighton campus. I made a lot of mistakes. I don’t think I had even taken a journalism class yet! But I believe in hands-on learning, so it was a great experience and helped me get into Rochester Woman Magazine and then Open Mic after that.

What do you like best about working for Open Mic?
Being able to say what I wanted to say and not be worried about being censored in a way. When I was writing for Rochester Woman Magazine there were things I wanted to write about from the perspective of a black woman living in Rochester that didn’t make it to print all the time. I wanted to write for a publication that would allow me to ask questions where they don’t get swept under the rug or pushed aside or even misunderstood. These things often affect communities of color so I put it out in the universe and within a month I connected with Tianna, editor at OM. It has been a dream since then.

As an area native, what are your thoughts on the revitalization under way?
Revitalization is always good, especially when you can balance the historic value of the old and the energy of the new. That being said, I don’t want to see Rochester take off and leave part of its community behind. I went to TedX Rochester and a speaker presented an idea about demolishing an entire neighborhood in Rochester to make way for a more upscale housing. After the talk, an organizer told me the speaker believed that the current residents were renters, low income and not able to bring value to the area, so just remove them. Even holding those ideas, he was still allowed to give the talk. Those types of ideas, which have the potential to displace people of color and people in challenged communities, are dangerous. I think if you are talking about changing, moving, demolishing, rebuilding, you need to ask yourself how it affects people that currently occupy those spaces and how everyone can benefit from it.

Historically the narrative we have about prominent figures and major events has always been a little skewed.
Being able to find fault in something or someone is not attacking, just knowing. The conversation can be had. I have never found someone whose life was ruined by having a better understanding of something. When celebrating Susan B. Anthony we don’t talk about how she was racist and how when women got the right to vote it wasn’t all women. We had to wait even longer to go to a voting booth and cast a ballot without any interference. It’s not bad to talk about these things and it’s necessary. If I had kids I would want them to know Christopher Columbus was garbage and Rosa Parks wasn’t just tired. She was working as part of a movement. These narratives are changed and altered. There was the movie about the Stonewall riots and they just added this character and people say, “It’s fine! It’s just a movie.” It’s not fine. It changes the story in a way that discredits the people of color who were actually influential in making these changes. You have to be able to let people tell their own story. That’s how you get and keep the truth even if it is a complicated truth.

You recently did a story about millennials in Rochester. What led to this idea?
New data released suggested Rochester’s millennial population is the fastest growing. We are also a large part of the workforce and that number is going up as well. But, despite the negativity that surrounds us, we really are interested in making our communities better. We want walkable green spaces, we want to support local businesses, we are demanding work/life balance, and, while a lot of articles put a negative spin on these things, ultimately millennials are inheriting this town and we are kicking ass to make it something we want to live in.

Do you think allies receive more chances to speak than the people they’re speaking up for?
Allies sometimes feel they don’t want to step aside because they don’t want to lose recognition. That’s understandable. When I do something I want credit. But to be an ally – whether it has to do with race, sexuality, anything – you have to be prepared to silence yourself for someone else to take your place and not treat someone like they’re speaking for an entire community. I haven’t seen it yet, but I would love to see someone step aside. If you look around and see a panel, speaker list, artist lineup, whatever and there are very few or no people of color, give someone your spot. Don’t just comment on the lack of diversity. Take action.

What’s Open Mic’s approach?
At Open Mic we definitely try not to speak for people. For us our writing style has more to do with accessibility. When we write it can’t be so technical. We want facts. It has to be accurate. It’s also about creating accessibility. When people read it you want them to understand it and not come away feeling like they understand less of what they’re reading about. We reach a broader audience but our accessibility online skews our audience a little younger.

How do you approach storytelling through Open Mic?
As a journalist you have to follow rules of engagement and writing. Sometimes I ask questions and just let people talk. I would much rather have an hour or hour and a half of you telling your story than ask short questions and get short answers. It can be hard to put it into words. I know Tianna would rather I am on time with my deadlines, but sometimes you need to let the interview marinate and find perfect quotes to let someone speak for themselves.

How has Open Mic helped you use your voice?
Open Mic helped me understand the things I’m passionate about a lot more. I wrote some personal pieces about my life, about how racism within my family made it hard for me to like myself and how I had an abortion when I was younger. I think without OM I would never have the nerve to say these things out loud, but knowing I have the support of my fellow writers and editor is like having an army behind you. Our stories are important as well. When we cover the mayor’s time in office, community gardens, or millennials in Rochester, it is important to all of us. Writing for a magazine has taught me not to get stuck in a bubble and to look at every aspect of something.

Is the wider community aware of Open Mic?
I think the community could benefit more from sending us press releases for everything. We want people to read our publication. If black people are the only people reading a black publication it kind of creates a vacuum. We have amateur bloggers getting invited to press events and we are not as regularly. We are a credible news organization. If you’re a business or hosting something, definitely think about who you’re reaching out to. Do a quick Google search and if there’s a black publication, include them in your event. Again, if you are looking around a press event and there are no media professionals of color, speak up!

What’s next for you?
I love writing for Open Mic. Writing for OM impacts people on a community level. I like helping people understand the world around them and I want the opportunity to make policies and help people on a wider level. I’ve decided to go into government. I have my eye on counter terrorism or working for a federal agency, still writing but to impact policy. OM has given me the guts to stand up for what I believe in and I want to take that all the way to the top.