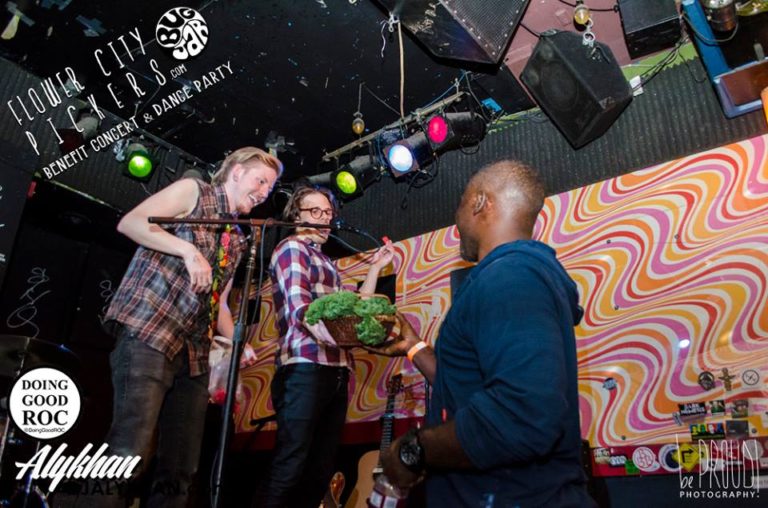 RocCity Coalition is a collection of people from various facets of the community whom are connecting with one another to achieve a stronger Rochester. Flower City Pickers, featured recently in the Fast Forward Film Festival, is a secular, inclusive, all-volunteer group with the mission to ensure no food is wasted and goes to people, animals, and Mother Earth.

The Pickers collect vendors’ leftover food, sort it into food grades, and distribute it. Grade “A” food goes to a list of shelters, halfway houses, and food pantries. “B” grade food is cooked and served that day by a partner group and distributed to soup kitchens and refugee centers, and “C” grade food goes to local critters or is composted.

FCP welcomes volunteers for Saturday market activities as well as administrative work throughout the week, new participation on its board, and fresh faces to attend its organizational meetings the second Monday of each month.

Khoury chatted with us about Rochester, turning ideas into action, and the importance of keeping one’s eyes open.

Q: What drew you to Rochester?
A: Being part of the LGBTQ community. I am transgender – female to male – and I came to Rochester because of the transgender rights and the community. I started volunteering with the Gay Alliance, taking pictures for The Empty Closet, and was going to “family dinners” in parks and at people’s homes and getting involved with groups like Rochester Snowball Effect. That group met and took on actions, like the little free libraries, and it was cool to see how inclusive everything was and go on bike tours of Wall Therapy and everything. Coming from Oklahoma, where a lot gets demolished or blown over, the architecture here, I’m enamored by it. I just fell in love with this place – except for the winters.

Q: What led you to form Flower City Pickers?
A: I never really had the idea of what Flower City Pickers has turned into. I was just upset about something, wanted to help and to be of use, and started picking up stuff and asking others if I could take what they couldn’t sell. But I was having some health issues and was here in the winter – usually I wouldn’t be – to get heart surgery. The City of Rochester had bulldozed Sanctuary Village, a tent city located under a bridge, and they got relocated to a warehouse shelter with no running water. I was baffled and taken aback. That wasn’t the Rochester I knew about. I couldn’t work at the time and didn’t have any money to help and had noticed there was stuff on the ground at the Public Market that was still completely fine and usable. So I decided to go and start picking it up and see what I could make of it. Maybe soup, maybe goulash, whatever. I just went there with a little piece of paper with my face on it and a blurb that basically said, “Hey, I’m going to be here every week. Be nice to me.” People started giving me stuff. It went from filling one car at a time to not having access to enough cars to fill up.

Q: A lot of people have ideas, but what compelled you to bring this one to action?
I had always gone to the Public Market and really enjoyed it. Every time I went there it was with friends and I passed on picking stuff from the ground. It’s not proper social behavior to pick up someone’s trash and be like, “I’m gonna eat that.” So when I read about Sanctuary Village I thought, “Maybe since I was too shy to do it for myself but there are so many people who need this, I’ll pick for them.” That gave me the courage. The fact that there’s so much waste is really disturbing. It’s ridiculous how oblivious people are. People ask, “How did you think of this?” I tell them, “I have two eyes, just like you. All you have to do is keep them open and look.” There’s a lot of waste at the Public Market and even in the grocery stores.

Q: How would you describe yourself?
A: I’m just me. I work as a barista for Java’s at RIT, which is great and they donate to us, and I’ve been doing photography for more than five years. I used to make and sell art a lot. But Flower City Pickers sort of grounded me. It used to be that during the winters I would never have been here. The only reason why I was up here during the winter I started Flower City Pickers was I had to get heart surgery at Strong. FCP has made me adjust to life in one city through each year, which is new for me. When I was younger my family was evicted often from homes and we were homeless for months at a time. I got used to moving around a lot, so became I was an adult, every six months or year I’d move. It’s challenging for me because I always have the desire to run around, do things, and go somewhere else for a while. But I really enjoy doing photography and art, and pretty much any free time I have goes into Flower City Pickers.

Q: If someone says they’re inspired by you, how do you respond?
Mostly, “Hey, that’s cool, but it’s nothing special.” I didn’t do anything out of the ordinary. I just started picking up stuff that was on the ground. The fact that no one has done that in so long is what you should notice – that this is our culture and our society. It’s disturbing.

Q: What’s next for Flower City Pickers?
We’re a secular group of volunteers, we have a board of directors, and everyone has their own ideas about where we’re going. This year we’re getting more media coverage, networking, tabling at events, and more. We have a bus that is at the market and is our storage. We would like a permanent spot at the market. We definitely need a company vehicle to help us with deliveries for the greater Rochester area to places that are by the lake or a little further out of town where some volunteers aren’t able to go. We’re experimenting with more than just Saturday collections and are trying out Tuesdays and Thursdays once it gets a little warmer. And we’ve had people from Buffalo and a group from Syracuse check us out and express interest in starting up similar projects.